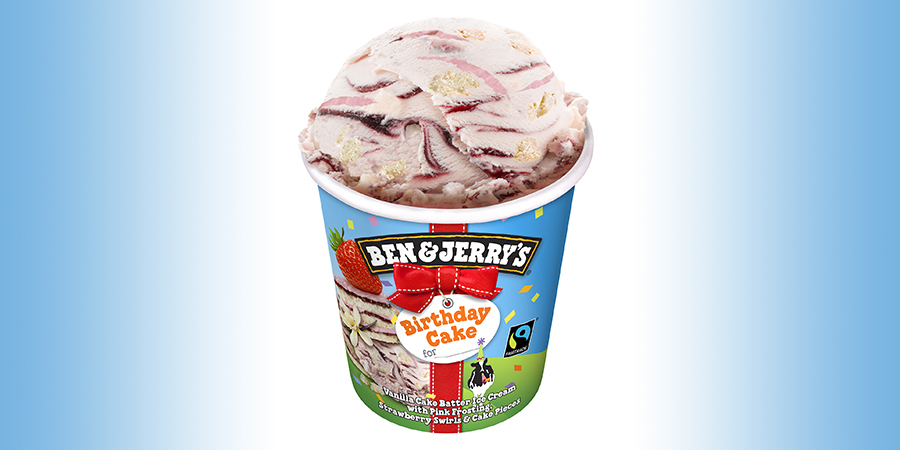 Ben & Jerry’s is marking its 40th anniversary by rolling out a Birthday Cake flavour, supported by a £3.5 million marketing campaign.

Ben & Jerry’s was founded by Ben Cohen and Jerry Greenfield in 1978 and is now a wholly-owned subsidiary of Unilever.

The company was sold to the conglomerate in April 2000, with its present-day headquarters being located in South Burlington, Vermont, and its main factory in Waterbury, Vermont.

The new Birthday Cake ice cream variant launched to mark the anniversary year is a vanilla cake batter ice cream, with pink frosting, strawberry swirls and cake pieces. It will be available nationwide and is made from Fairtrade-certified ingredients.

The Birthday Cake’s tub design features coloured confetti and a red bow on top and front of pack in order for consumers to gift a tub to friends.

In addition, in-keeping with the rest of Ben & Jerry’s flavour portfolio, the pack features a visual of the ingredients inside the tub as well as the Fairtrade logo.

Christina Dunn, Ben & Jerry’s country business leader at Ben & Jerry’s UK and Ireland, commented: “We know that our fans like to gift Ben & Jerry’s to their friends, so new Birthday Cake responds directly to this insight, with a new addition to our flavour family ideally suited for the gifting occasion.

“We’ve also seen an increasing desire for innovation when it comes to birthday cakes, with boundaries being pushed from traditional designs to impressive, bespoke creations. We hope fans enjoy digging in to our new twist on the birthday cake moment and join in on our 40th birthday celebrations.”