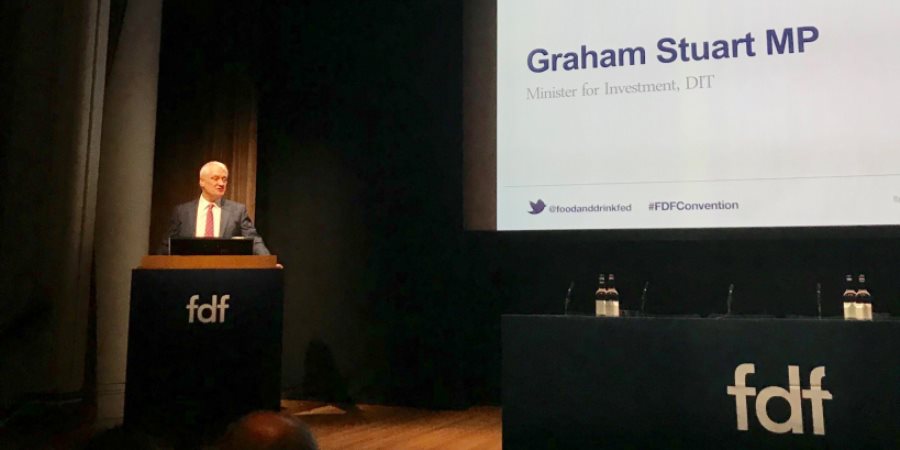 Speaking at the Food and Drink Federation (FDF) Convention at the National Gallery in London, Minister for Investment at the Department for International Trade, Graham Stuart, said that in the first three months of the year, exports had reached £5.7 billion – a rise of 12.3% on last year.

Food and drink exports are now double what they were in 2007, reaching £22 billion a year.

He said that there is an army of consumers around the world who now consider the label ‘made in UK’ to be a badge of excellence.

In the face of Brexit, Stuart believes food and drink companies are seeking more markets around the world, citing new trade deals to export Northern Irish and Scottish langoustine to China, beef and sheep meat to Japan and sheep meat to India.

He added that the government is already in discussion with economies around the world such as India and the US looking for trade deals after Brexit.

He  also spelt out some of the measures the government is considering to mitigate the effect of Brexit, including moving paperwork and documentation away from ports to avowing blockages at the ports and to prevent the possibility of food spoilage on the lorries.

He added that Brexit does not mean any lowering of standards and he said that the UK is in a good position to continue preferential trade deals with the EU.

In reply, Sue Hayman, the shadow secretary of state for Defra, said that Labour could not countenance leaving the EU without a good deal and she said that they had been fighting in the Brexit negotiations to get the best possible deal for the food and drink industry

She warned that there is great concern both in Ireland and the rest of the EU over the possibility of a ne deal Brexit.

Ms Hayman said that while UK food and drink exports are growing, last year they fell to non-EU countries while they grew to the EU states.

She felt there was an anomaly between the quality and supply of food and the fact that some people were being forced to get food from food banks. She also warned that action had to be taken to reduce food waste.

Ms Hayman confirmed that the Labour party is in the process of producing a policy document for sustainable food and farming. – both environmentally and economically.

The Food and Drink Federation Convention also took a detailed look at how the industry could better promote “Brand UK” in the face of the current political scene and it looked at the industry’s use of plastics in packaging and the role the industry is playing to reduce use and to introduce recyclable and reusable plastics.