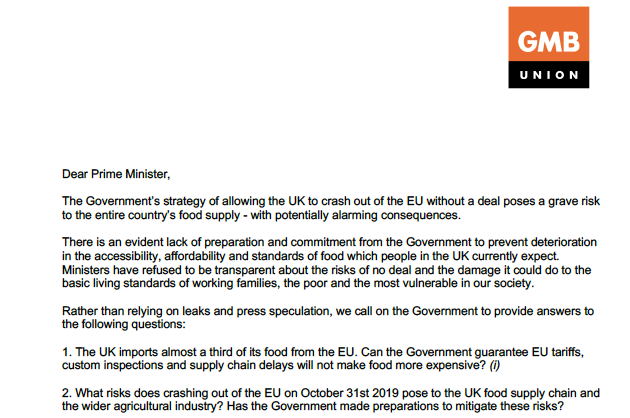 The letter to the Prime Minister claims a no deal poses disastrous risks for the UK food supply.

Former Prime Minster Gordon Brown has backed calls by GMB, the union for food workers, food charity Hope Not Hate and the alliance for better food and farming Sustain, to demand Boris Johnson comes clean on the potentially disastrous risks a no deal Brexit will have on UK food supply.

Suspending Parliament stops scrutiny of how no deal could cause hunger and destroy lives, is the message in a letter to the Prime Minister warning him that to ‘crash out of the EU without a deal poses a grave risk to the entire country’s food supply.’

It demands answers to nine key questions about Government preparations to cope with food shortages and price rises and the subsequent effects on families, the vulnerable, public services, the voluntary sector and workers in the food industry.

Gordon Brown, Former Prime Minister, said: “A no deal Brexit threatens the UK’s food supply chain. Imports of almost a third of our food could be subject to disruption.

“Uncertainty, restricted supplies and a weakened pound could raise prices. This would be a catastrophe for the food industry but also for family budgets, hospitals and those driven to food banks due to the decimation of our social security system over the last decade.

“In the North West, 83,000 three-day emergency food parcels were given to children by the Trussell Trust in 2018/19. We cannot put the future of the most vulnerable people in our country at risk as Prime Minister Johnson and his advisers stand to lose nothing.

“Let’s stop no deal, stand up for our future and start fixing the problems really impacting people’s lives in this country.”

Tim Roache, GMB General Secretary says: “No deal is no joke – it makes no sense for working people.

“The risks are writ large when it comes to the food we eat.  With all the talk about coups and leave promises written on the side of buses, the real detail often gets missed. It’s time for Boris Johnson to come clean.

“With no deal, we’re likely to see a huge impact on everything from increased cost of the family shop and less choice on supermarket shelves, through to job losses in food production and reduced nutrition in school and hospital meals.

“The Government is walking us to a cliff edge and seem more interested in ideological Tory Party politicking than making sure we have a stable food supply.”