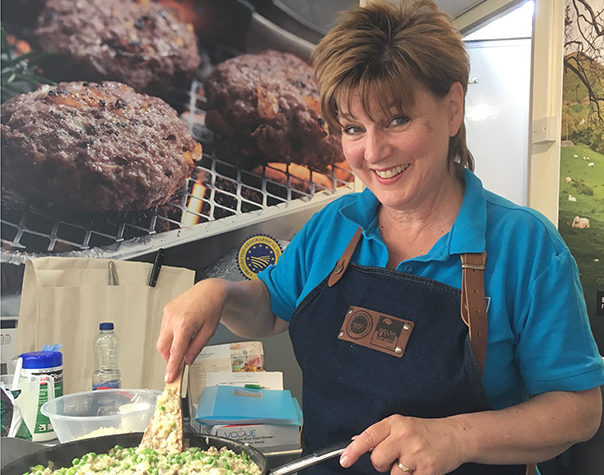 2019 was to mark consumer executive for Hybu Cig Cymru – Meat Promotion Wales (HCC) and popular cook Elwen Roberts’, 36th working visit to the Royal Welsh Show, but a broken wrist means that HCC will have to manage without her trademark cooking demonstrations this year. But Elwen’s  team in the HCC kitchen will return to provide samples of Welsh Lamb, Welsh Beef and pork to Show-goers, along with a selection of guest chefs.

Making a welcome return to the Show too will be Luke Thomas, the young chef whose career has taken him from his upbringing in Connah’s Quay to top London restaurants.

Elwen Roberts, popular cook and has been nominated for a top award by the food industry, as a finalist in the ‘Women in Meat’ Industry Awards.

HCC market development manager, Rhys Llywelyn, said: “We’re sorry that Elwen won’t be with us for the Show this year. But at the same time, we look forward to welcoming her back soon and are thrilled that her great work is being recognised by the industry.

“I’m sure many of the people and organisations who have benefited from Elwen’s expertise and engaging work will be keen to support her. The voting closes on 5th August, so they need to hurry!”

Elwen undertakes cooking demonstrations in schools and on television for S4C, as well as leading work to train teachers and develop education resources to help children understand the origin of food.

The result, to be announced at a prestigious dinner in the Royal Garden Hotel in Kensington in November, will be decided by an online public vote at womeninmeatawards.com/vote.

Elwen’s nomination is in recognition of a twenty-year career in the industry, during which she has showed great commitment to educating the public, teachers, children and health professionals regarding how food is produced, balanced diets and the importance of food traceability.