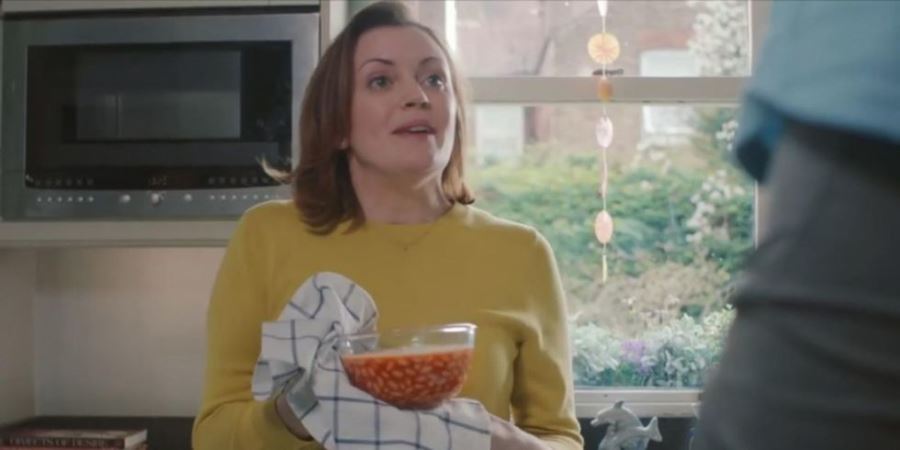 A screenshot of the Heinz Beinz advert that has breached the UK Code of Broadcast Advertising (BCAP Code).

A television advert for Heinz Beanz, broadcasted in February 2018, has breached the UK Code of Broadcast Advertising (BCAP Code).

The advert in question began with a man arriving home to his family – a woman and a young girl.

The man was asked whether he was hungry in which he responded: “Yeah I’m on a new regime” before picking up a shake which he described as: “Protein, with high fibre and minimal fat.”

The woman then retrieved some baked beans from the microwave and said: “Right. We’re just having some beans.”

The screen displayed prominent text which stated: “High in protein. High in Fibre. Low in Fat”, then displayed a can of Heinz Beanz with the accompanying text: “Good for you, without going on about it”.

The Issue
One complainant challenged whether the advert included a nutrition claim which complied with the BCAP Code.

The Response
HJ Heinz Foods UK Ltd said that the advert made the authorised nutrition claims that a portion of Heinz Beanz was high in protein, high in fibre and low in fat.

It considered that most viewers would understand “Right. We’re just having some beans” to mean that the female character was having beans instead of the drink and the associated benefits of the drink.

It considered consumers would therefore interpret the advert as presenting Heinz Beanz as a tastier and more appetising, but nutritionally equivalent, alternative to consuming a protein shake.

ASA considered that the advert made a nutrition claim which was not permitted in the Annex to the Regulation, concluding that the claims were in breach of the Code.

The advert must not appear again in its current form, and ASA is reported to have told Heinz Foods UK Ltd to ensure it does not make nutrition claims that are not permitted in the Annex to the Regulation.