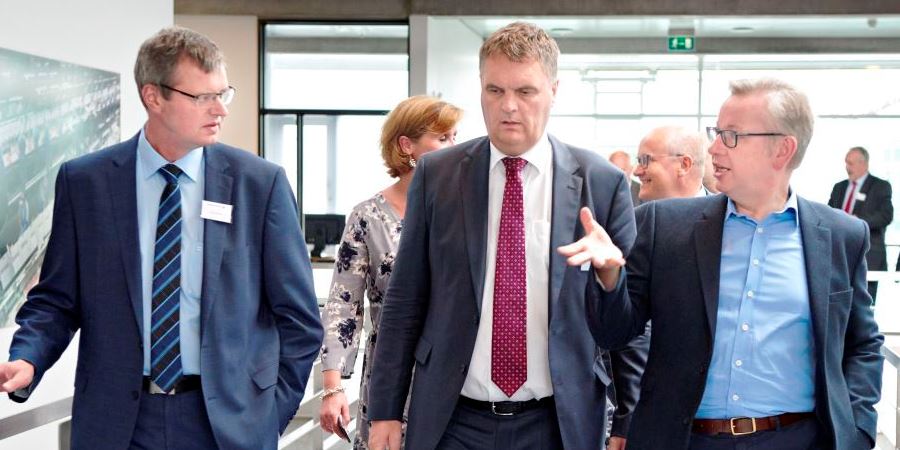 Defra Secretary of State Michael Gove has visited the Danish Crown plant in Horsens, Denmark, as part of a three-day tour to Scandinavia.

Gove wanted to spend a day in Denmark to explore the country’s agricultural systems, to ‘gain an understanding of its approach to agri-efficiency and innovation, and to absorb information on the Danish food and farming sector’.

The latter provided an overview of the Danish Crown business and its strategically important UK operations. Valeur also shared some of the challenges to be managed as the UK prepares plans to exit the EU.

Valeur observed that meeting UK consumer demand for food safety and high animal welfare standards must continue to be a prerequisite, and stressed the importance of investment in UK agriculture and food processing, and the ongoing necessity of workforce access.

He commented: “The UK is a key export destination for our Danish produce, and we also have extensive interests and leading positions in UK farming and meat processing, so we are watching Brexit negotiations with more than a passing interest.

“It is clear that managing the UK’s exit from the EU involves huge complexity, and we hope that the outcome will provide for a business environment that encourages continued growth.”

Gove’s visit also included a brief tour of the Horsens pig processing site, and a discussion where Gove had the opportunity to hear from senior executives from a range of Danish industry organisations. From Horsens, the visitors went on to the pig farm of Søren Sondergaard where he was able to see some of the work done by Danish farmers.

This was Gove’s first overseas ‘fact-finding visit’ since his Defra appointment, and has re-confirmed the Government’s aim to land a ‘deep and comprehensive free trade agreement’, and to drive UK productivity growth without sacrificing standards.