Food tariffs on the agenda for imports – Gove 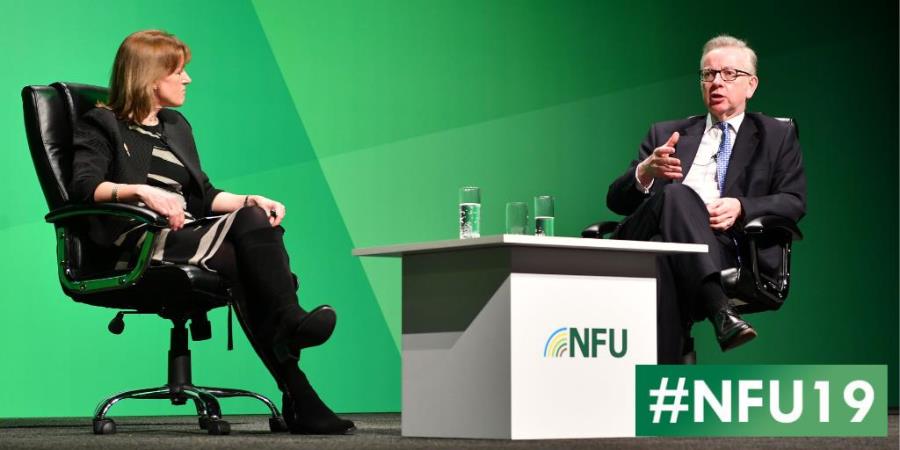 Minette Batters and Michael Gove at the NFU 2019 conference.

Speaking during the recent NFU Conference at the ICC Birmingham, Secretary of State at Defra Michael Gove has promised to protect farmers and the food industry from cheap food imports.

In her own speech to Conference, NFU President Minette Batters called for the Government to convene a new commission of food and farming experts to establish the principles that will ensure Government upholds the high standards of British food production post-Brexit.

Mrs Batter’s vision for the new commission is that it will make clear recommendations on the UK’s future food trade policy, including how to ensure food imports are held to the same high standards as those British farmers adhere to and how future trade deals ought to be scrutinised by Parliament and industry. Crucially, there must be a commitment that Government will be required to act on these recommendations.

In addition she stressed that a strong farming industry goes hand-in-hand with a strong environment. Mrs Batters took the opportunity to outline more detail about the NFU’s ambitious plans to tackle greenhouse gas emissions and for British farming to aim to achieve net zero by 2040. A drive to improve and invest in productive efficiency, incentivising carbon capture from the atmosphere and biofuels to power carbon capture storage systems are all part of the strategy.

One year after being elected as the first female President of the NFU, Mrs Batters reiterated the strategic importance of British food and farming for the nation’s food security, environment and health and wellbeing.

Mrs Batters said: “I committed last February that I would do my utmost to champion British food and British farming. My mission has been to ensure that the country understands the importance of this strategically vital industry for our health and wellbeing, for our environment and for our food security.

“The scale of the challenge is enormous. Around 200 million meals are eaten every day in Britain. And the population is growing. We are proud to produce much of that food. We are proud of our standards. We are proud that British people have access to affordable and quality British food regardless of their income.

“I have asked the Secretary of State to commit to ensuring that any future new trade agreements will not undermine British food standards. Put simply, a commitment that after Brexit the food Britain imports will be produced to the same standards which is legally required of British farmers.”

Mrs Batters reminded delegates that: “Mr Gove has said that over his dead body would British standards be undermined. I don’t want it written in blood. I want it written in ink”. The issue of maintaining our food standards is critical, which is why I am asking for a high-level commission to be convened, bringing together government officials, industry representatives, civil society groups and experts in food and farming.

Defra Secretary of State Michael Gove expressed his support for a commission to be convened to establish the principles to ensure Government upholds the high standards of British food production post-Brexit. Responding to the NFU’s call for the commission, Mr Gove told NFU President Minette Batters that he would send her a letter by “first class post” confirming his support for its creation.

Mr Gove also told NFU’s conference delegates at Birmingham’s ICC: “We want to move as quickly as possible to harness the expertise in this hall, and beyond, in order to ensure we have a commission to make sure that we safeguard standards.

“There is concern that standards might be compromised in pursuit of future trade deals. From the Prime Minister down there’s a determination to ensure that won’t happen. I will make sure we do everything we can, as quickly as possible, to harness all of the talent that you can bring together under the umbrella of this commission.”

During a question and answer session after Mr Gove’s speech, NFU member Gary Yeomans, from Monmouthshire, asked the Secretary of State for reassurances that zero rate tariffs would not be applied to food imports post-Brexit.

Mr Gove confirmed the cabinet had been discussing what the tariff regime might be in the event of a no deal and said an announcement should be made later this week. He added: “One thing I can reassure you is that it will not be the case that we will have zero rate tariffs on food products. There will be protections for sensitive sections of agriculture and food production.”